Amsterdam Cycling Chic writes. The Best Summer Read: “We were lucky enough to take a ride and have a coffee with esteemed Professor, lecturer, and researcher Ruth Oldenziel, co-author of the latest and greatest book Cycling Cities: The European Experience. It’s 200 pages are carefully researched and thoughtfully describe how cycling came to be (or not so much) in several European cities – with Dutch cities as a backbone story of cycling decline, automobility, then incremental change towards what are now urban cycling “success stories”. Of course every city has its own story, culture, and responses to change, and this work delves into those stories from 14 cities in 9 countries. From Budapest’s bicycling revival to Manchester’s “standstill”; Lyon;s corporate enterprise to innovations in Malmö we can read about diverse trajectories in urban cycling but all with the same goal: to get more people on bikes.” Amsterdam Cycling Chic interviews one of the authors.

In search of the most conducive conditions for D.C., The Washington Post examines the cultural dimensions of the bikeable city. “The measurement of how successful cycling culture is its inclusivity”, explained Ruth Oldenziel in an interview with the newspaper. Both visionary policymakers and a vibrant social movement are important to make cycling accessible for all. 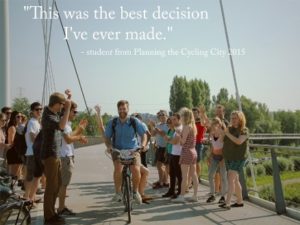 How to create a cycling city? And is Amsterdam the real deal as the cycling capital of the world or not? Yesterday, Ruth Oldenziel kicked off the conversation with a guest lecture at the University of Amsterdam’s Summer School Grad Course Planning the City, where thirty scholars and practitioners from all over the world are studying these questions. These students were surprised to learn from Cycling Cities that Amsterdam’s history with cycling is checkered and almost an accident of history. The students learned about the five factors explaining why some cities cycle and others do not. 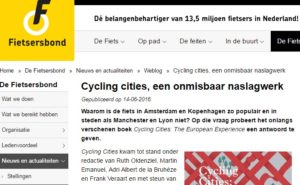 In his book review, history-trained and cycling professional Wim Bot  calls Cycling Cities the indispensable book. Anyone interested in cycling policy should have it on their bed stand.

Carlton Reid  praises Cycling Cities for its historical insight into the key question: what is more important for cities to become true cycling cities? Cycling infrastructures or Traffic calming? To illustrate the book’s key message, Reid quotes the authors: “Bicycle lanes and highways are expensive to build, but cost politically less because bicycle lanes do not question automobility. Traffic calming measures are cheaper – as Amsterdam discovered. They demand political courage …” See Reid’s review for an excellent introduction to the book’s key points.

Cycling History scholarship is a booming field. Cycling Cities has now been integrated in the great database hosted by Manuel Stoffers. A must for anyone entering the field. 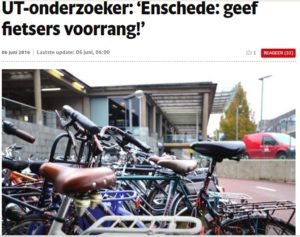 Enschede journalist asked author and editor Adri Albert de la Bruhèze to comment on what policymakers should do based on the lessons learnt from research. The Cycling Cities suggests that traffic calming in 30-mile zones rather than separating cyclists and motorists is the most effective.

At the pre-summit of the EU Smart Cities meeting at the TU Eindhoven May 22, Oldenziel presented Cycling Cities. The meeting was hosted by the Dutch Ministry of Infrastructure and Environment and the Dutch Urban Approach program.