Cork has a rich cycling history and culture. From early the years of the Irish state to recent upsurge in cycling following the Covid-19 pandemic, Cork has always been a cycling city.

The 1930s saw the first international bike boom as bicycles became more reliable and affordable for all. Images and newspaper reports show endless streams of cyclists on the city streets. During the wartime years as fuel rationing took hold, and later into the 1940s due to public transport strikes, cycling was considered the most economical and reliable way to get around the city. A 1951 traffic count showed more bikes than cars on the streets in the city centre. Well into the 1960s, the bicycle was the primary mode of transport for many, across all ages and social status.

In the 1990s, the decline began as the car ownership grew substantially. Streets became busier, and speeds increased, leaving the bicycle for the brave and confident few who were willing to cycle amongst the heavy traffic. 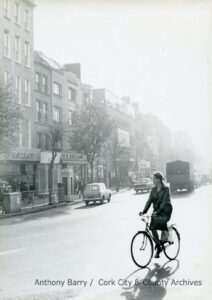 Cycling is on the rise again in Cork. From packed city centre bike parking stands to the regular flow of bikes on the main routes, the increased popularity of cycling is there for all to see. The Cork Cycling Campaign, in collaboration with the Foundation of the History of Technology and the Eindhoven University of Technology, is researching and documenting Cork’s cycling history over the past century.

Cycling is part of Cork’s sustainable economic development policy. The Cork Metropolitan Area Transport Strategy 2040, and Cork Air Quality strategy support prioritising active travel for a more sustainable transport model for the city. Cork has also recently been selected as a Mission City for the Horizon EU project with aim of achieving carbon net zero by 2030.

With policy supporting active travel, we can now see infrastructure progressing. Cycling investment is planned for the city in the coming years, but rollout remains slow. Many existing cycle lanes are fragmented and end abruptly. In a 2021 campaign survey, less than 1 percent of people indicated that they had proper cycling infrastructure for 75 percent of their journeys. Concerns about road safety prevents more people from taking up cycling. Acting on policy plans to deliver a connected cycle network is needed to make cycling safe, comfortable, and attractive option for all ages and abilities.

Infrastructure and policy alone however are not enough to encourage more people to consider active travel. Promotion, education, and raising awareness plays a vital role in changing mindsets and behaviours towards cycling. Cycling Cities: The Cork Experience aims to help bring about a change in attitudes towards cycling, by showing how cycling once belonged to the city’s daily life—and can be once again.

Join us to make it happen!

The Netherlands Embassy in Ireland is pleased to support Cork Cycling Campaign in its worthy initiative to publish the Cycling Cities Cork edition. Having nurtured close working relationships with the city and county of Cork over numerous years, we remain fully open to and engaged in building a sustainable mobility future together.

Researchers
Kevin Long, an Electronic Engineer, has been a member of Cork Cycling Campaign since 2019. In early 2021, Kevin initiated the Cork Cycling Cities project with the team at the Foundation for the History of Technology, University of Eindhoven. Kevin has been searching archive records and local sources to build a picture of the history of cycling in Cork over the past century, and coordinating research efforts on this project.

Conn Donovan, studied Law at University College Cork and during his ERASMUS year at the University Erlangen-Nürnberg before doing a MSc in Urban and Regional Planning at Heriot-Watt University in Edinburgh. He worked as an Environmental Planner in the United Kingdom for several years before returning to Cork in 2014 and retraining as a primary school teacher. Conn was a member of the Secretariat of the Cork City Public Participation Network and is currently the Cork representative for the Executive Council of Cyclist.ie. As Chairperson of the Cork Cycling Campaign, Conn is promoting the Cycling Cities: The Cork Experience research project to raise awareness of Cork’s cycling traditions and possible avenues for change.