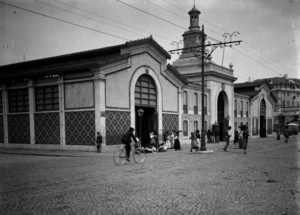 Our Next City is Lisbon

Portugal’s capital city, Lisbon may not be the most obvious case study for a cycling city. Bicycle ownership numbers, between the 1920s and late 1960s, show the seaside area of Aveiro, where the metal industry has been thriving in producing bicycles parts, together with districts like Porto and Coimbra, historically leading in cycling.  Lisbon lagged behind, even when considering that more people lived in the city. Between the 1880s and 1910s, Lisbon had a thriving cycling culture spearheaded by the Portuguese Velocipedic Union (established in 1899). Since 2009, new cycling associations and activism have revived cycling and have succeeded in helping local and national administrations in revising regulations, constructing new cycle ways , and implementing a public bike-share program (GIRA).

Like elsewhere, the source-rich period of the bicycle craze in the 1880s evaporated from the historical record in the mid-1910s, creating the notion that cycling too disappeared. Our preliminary research of alternative historical sources such as local newspapers, photographs, commerce yearbooks, advertising and urban planning records of roads, sidewalks, and parks, however, reveal the forgotten history of cycling in Lisbon. Our study will broaden the scope to understand the diversity of cycling cultures in the larger Lisbon Metropolitan Area including the leisure area of Estoril and the industrial south bank of the Tejo River.

These historical sources show how cycling levels remained consistent. In the 1930s, for example, the bridge planners for the Tejo river projected that bicycles would have a significant share in the traffic crossing the bridge of approximately 50 percent compared to cars. The first traffic counts for national highways in 1937 suggest that cycling was often more popular than cars in some Lisbon district roads.  And cycling also had a significant uptake after the Second World War, when fuel shortages limited motorized mobility. Since the 1960s, motor cycling and the family car has been displacing cycling.

Our  research group will examine five factors of the Cycling Cities project to understand the ups and downs of cycling history in Lisbon from the enticing bicycle bell of the one-man metal repairs business (Amolador’) to many other service people who used bicycles for their jobs including military personnel, postmen, and policemen as well as ice-cream seller, chestnut vendors, and other types of salespersons. We look at the sites where Lisbon citizens first began to cycle in the 1880s, ranging from the Campo Grande park and the Terreiro do Paço square to the scenic touring route of the 1940s coastal road, connecting Lisbon to Cascais, and the Monsanto forest, Lisbon’s 1970s planning for a green “lung” (Corredor Verde), green urban spaces that today serves as an anchor for the city’s most recent cycling policy. 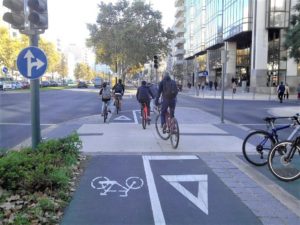 Research team
João Machado  is a research fellow at the Interuniversitary Centre for History of Sciences and Technology (University of Lisbon), and a previous contributor to the Making Europe. Technology and Transformations 1850-2000 project, researching the history of cycling in Portugal.
Dr. M. Luísa Sousa  is an assistant professor and a research fellow at the Interuniversity Centre for the History of Science and Technology (CIUHCT), at the NOVA University of Lisbon, working on the post-World War II development of highway engineering.
Bernardo Pereira  is an architect (University of Waterloo School of Architecture, Canada), cycling mobility adviser for Lisbon and other municipalities in Portugal, researching urban cycling under the University of Aveiro public policies PhD program.
David Vale is an assistant professor at Lisbon School of Architecture, University of Lisbon, teaching courses such as Urban Geography, Road Systems and Transportation, and Geographic Information Systems. His research is focused on the integration of land use and transportation, and on the integration of different transport modes, with a special focus on transit-oriented development and walking and cycling.